Letters of marque – more properly called “letters of marque and reprisal” originated in 1243 when King Henry III of England issued licenses to specific individuals to seize enemy cargoes at sea and split the proceeds from the sale of those cargoes with the Crown. Later, in1354, King Edward III broadened the scope of these licenses to authorize a subject to make reprisals against the citizens and possessions of a hostile nation for alleged injuries perpetrated against the king by that nation. While at the time the reprisal could take place on land or sea, early on the term came to apply only to measures taken at sea.  Those in possession of a highly coveted letter of marque became known as privateers, and the practice was quickly adopted by most European maritime nations and became a mainstay of international law. 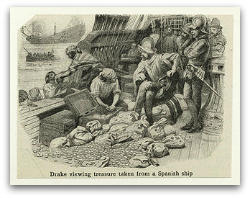 Perhaps unwittingly – although probably not – the Plantagenet king had opened wide a treasure trove of opportunity and profit for the private sector and for the Royal Exchequer. Throughout the Middle Ages enterprising English sea captains operated with the tacit understanding of their king if not his outright commission in harassing the maritime trade of offending nation-states. Things reached a fever pitch when privateers such as Sir Francis Drake seized Spanish ships laden with gold and silver on their return voyage from South America and the Spanish Main. Queen Elizabeth I was only too happy to accept this Midas touch and share in the bounty of the captured treasure and subsequent sale of the seized vessel, its value determined by newly developed Admiralty Courts (also known as “prize courts”). The privateer’s captain and crew all received a share based on rank, so everyone was happy – except, of course, the captain and crew of the captured vessel and the Court of King Phillip II of Spain. His displeasure led ultimately to the defeat of the Spanish Armada, one of most colossal and humiliating defeats in military history.

A letter of marque thus conferred on the private merchant vessel a quasi-naval status, to the point where it was equipped with naval-style guns, often the 6- or 12-pounder variety. (A 6-pomder gun, for example, fired a shot that weighed six pounds.) A commissioned privateer was afforded the full protection of the rules of war, and captured privateers were treated (in theory at least) at prisoners of war. Unlike a naval vessel, however, the primary objective of a privateer was not to engage and destroy the enemy. A privateer’s prime objective was to board an enemy merchantman having caused as little damage as possible to its top-hamper and hull (so to not damage the selling price) and claim it as a prize of war.  If an enemy naval vessel looked on the horizon, a privateer would normally clap on all sail and run, no matter how heavily armed it might be. .

During the American Revolution, letters of marque were issued by state legislatures and by the Continental Congress. Such was the lure of quick and substantial profits, privateering made it increasingly difficult for the Continental navy to recruit sailors. The navy also seized British merchantmen, but not as a prime objective and not with as generous a split of earnings among the ship’s company.

To help illustrate the point, below is an exchange between Captain John Paul Jones and protagonist Richard Cutler that takes place in chapter one of A Matter of Honor. Jones is in Hingham, Massachusetts to recruit the 17-year-old Cutler as a midshipman to serve with him in the Continental sloop-of-war Ranger. Cutler has just informed Jones that Richard’s father, a shipping magnate, has donated two of his merchant vessels to the Glorious Cause.

“I understand your father sent him [Gen. George Washington) two brigs last year.”
“Yes, sir, he did,” Richard acknowledged.
“Refitted as privateers?”
“Yes, sir. They’re based in Beverly and they’ve had some success. Their biggest prize was three British merchantmen bound for Cape Ann with munitions for Admiral Graves. General Washington was pleased to accept those munitions in his stead. I suspect the British might still be in Boston had these ships not been captured.”
“I couldn’t agree more. Which is why I’ve invested so much time pounding the tables of Congress in Philadelphia. We need a strong navy for the very same reasons we need a strong army. We cannot rely for our defense on state militias or other local groups anymore than we can rely on privateers or state navies. If we are to prevail in this rebellion, our ships must do more than simply disrupt supplies coming from England to America. “
“We have more than a hundred privateers at sea, Captain,” Richard pointed out. “Have not the supplies they have seized helped our cause?”
“Yes, they have. And they have also done much to line the pockets of the owners of those vessels.” Jones took a deep swig of ale. “Privateering is not a calling, Richard. It’s a business, pure and simple. A damn profitable business, I might add. So much so that it’s become nigh impossible to recruit able seamen for our navy. Everyone wants a share of the riches, on the civilian side. But whilst privateers serve one purpose – and I concede, it’s an important one -- the navy serves quite another. And the navy’s mission will ultimately prove more important to victory.”

As a footnote to this discussion, the French term for a letter of marque is lettre de course, a term which gave rise to the word “corsair” as a synonym to “privateer.”

William C. Hammond
William C. Hammond is a novelist, literary agent, and business consultant. A lifelong student of history and a sailing enthusiast, he frequently sails on Lake Superior and off the coast of New England. He lives with his three sons in Minneapolis, Minnesota.